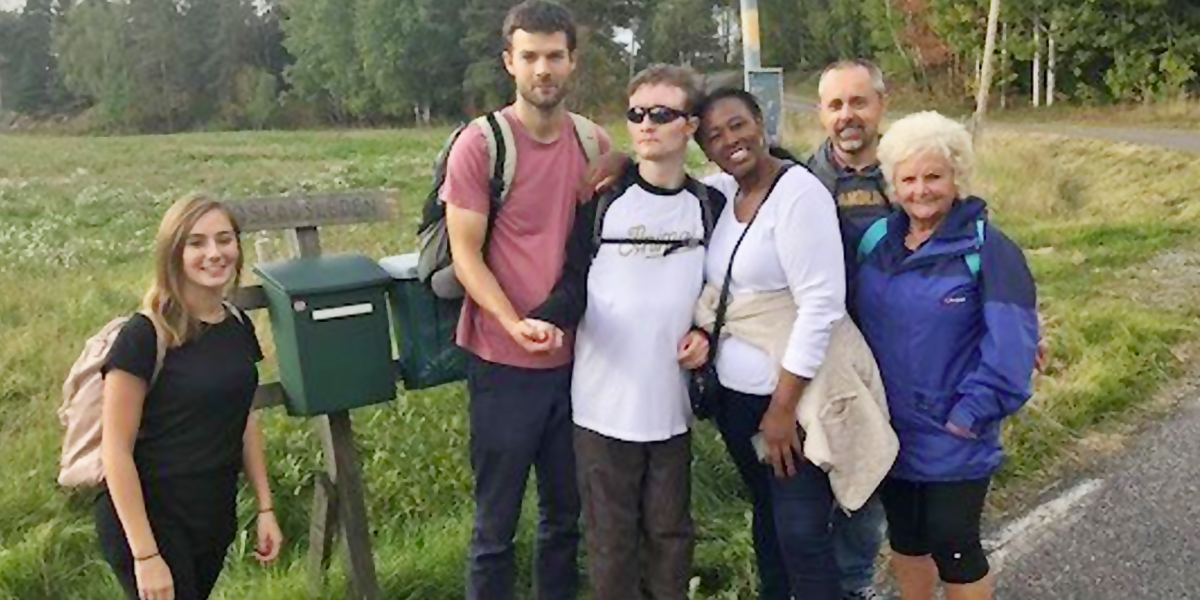 Ricky walks the walk in Sweden!

The idea for a trek started at Ricky’s planning day in October 2016, Ricky had been supported by Beyond Limits for a year and things were going well and so we were trying to work out what else could be possible.

Over the next 12 months, Ricky was doing 5km starting at a very slow speed and eventually reaching 5km an hour. At the beginning, there was very slow progression. It was not easy for the team and Ricky’s family to change their expectations of Ricky and feel confident to support him in moving forward with this trek. This created some barriers which hampered Ricky’s progression in the first year. We posted some videos of Ricky training earlier in the year.

During the second year, Kieran set out a training regime for the team with planned progression leading from 5km to 25km over the year. During this year, the team pulled together and Ricky progressed beyond the team’s expectations training in all conditions; freezing temperatures, snow, ice, hail, rain, and even some very high temperatures. During the training Ricky and his team found themselves suffering with blisters and aching limbs. Despite this, everyone pulled together and persevered with the weekly training treks.

Kieran selected Swedish forests as a location for the trek and Ryan came along and organised the route, travel and accommodation.

The team left for Bristol airport on the 3rd of October at 5am for the flight at 10.30am which took 2 hours to reach Copenhagen. we got off the flight and jumped on our train to Stockholm.

We all went and got the cars. One team took Ricky back to the house, an hour outside of Stockholm to a place called Lilla Vaxtunavagen and the other team went shopping for essentials. Both teams were going to bed around midnight.

We left in the cars at 9.30am and started the walk on Roslagsladen trail at 10.30am. To begin with, we were met by a very steep muddy path and from here on-wards, Ricky was leading from the front all day across very difficult terrain. It was certainly a shock to the system for the team who were used to walking on flat tarmac around Burrator Reservoir!

The team had split into two due to mum Gill suffering from illness and this split was consistent with the remainder of the trek. The team were continually walking for 4 and a half hours until Ricky’s crew were met by the support team (Grandad Dave and Cousin Cath) for lunch at Wira bruk at 3.30pm and the other crew met shortly after.

The first group arrived back to the accommodation at 5.30pm, and the second group at 6.30pm. the team were well looked after by the support group who had prepared dinner for everyone.

Mum Gill became ill and retired to bed shortly after dinner. Everyone else followed not long afterwards to get an early night ready for the remainder of the trek the following day.

We got up and left about half an hour later than planned. We began walking at 9.30am and made really good time during the first 10km due to the flat tarmacked trail. After this first break at the 10km mark, the trail soon became more complex and slowed the team down quite dramatically to approximately a third of the original pace. At points it was necessary to make a three man chain to help Ricky up steep rock parts of the path.

Day 2 was certainly harder for the team due to sore feet, aching limbs, hunger and the difficult terrain. We met the support team at Bergshamra for lunch, 7km from the end of trek. We were wished well for the last section of the trek and Ricky continued to munch a doughnut once we were back on the walk.

The last section was pretty slow going with lots more forest trail than gravel road but we could feel we were getting very close to the end. 3km from the end, we turned off the Roslagsladen trail and enjoyed a relaxing walk, all of us together in one big group all the way to the house where we were greeted by Gill, Grandad Dave and Cousin Cath taking videos and shouting congratulations. We ate one of the best stews ever, packed up and headed to Stockholm for the 6 and a half hour night train north to Ornskoldsvik.

In the morning we went to collect the hire cars and drove another hour north and inland to Bergsjo to our cabins on the lake where we would stay for two nights to live in the wilderness and wait to experience the northern lights.

After Ricky had had a rest we all went into the nearest town to have a coffee and go to the coast. Ricky walked down to the coast and climbed a big rock where we sat and enjoyed some snacks in the sun by the sea.

We then headed back to the cabins and had a Cousin Cath roast together and then spent the evening relaxing for the first time on the trip playing cards and looking up at the clear sky packed with stars.

Next we went up to the northern city of Umea to eat together and watch the football. On our way back we stopped along the road to get out of the cars to witness the surreal and majestic northern lights above our heads.

Later at the house we made a fire in the garden and stayed up talking until we each wanted some sleep.

In the morning we sat together and Ricky spent hours smiling, comfy in the house while it rained for the first time on our trip.

Once the rain had stopped Ricky had a wash in the hot Sauna at the bottom of the garden by the lake, something most people had done that day as the house had no running water due to a clogged pump and a dry well.

Now it was time to go back up to Umea to begin the long 18 hour journey back down to Copenhagen for our last meal and night out together. We ate well and went to a local bar where Ricky had been on a previous break where we saw Copenhagen’s answer to the beach boys ducking under oversized hanging beer labels and giant pretzels.

In the morning Ricky, Grandad Dave and Hamish walked down to a café where Ricky had been before so they could have a coffee together down by the canals. Others went to visit the famous little mermaid statue before packing for the last time ready to fly home.

What a trip, lots of sore bodies and sore feet. It really was brilliant that totally exceeded all expectations.

Now time to start planning the next one !

Top
Social Justice not Social Care
We use cookies to analyse visits to our site. Understanding what people are interested in helps us improve the website. We NEVER share information about your use of our site. You consent to our cookies if you continue to use our website. I'M OK WITH THISMORE INFORMATION